Posted on November 16, 2014 by theopinionatedtraveler

Now that I have Plenty More, Ottolenghi’s newest masterpiece, I’ve found myself getting reacquainted with Plenty, the equally inspiring prequel to this Vegetarian Bible.  I’m always intrigued by the array of other ingredients Ottolenghi uses to compliment the cauliflower. I’m fixated on roasted cauliflower, and because of this, I only took elements of his original recipe to cook this. He kind of steams the cauliflower and I was insistent on making sure mine was well-and truly roasted. But the flavors he uses in this dish go so well with the cauliflower that I used pretty much all the same ingredients.

I would highly recommend this as a side-dish for any Middle-Eastern style meal. The saffron and raisins (I think I used dried cranberries) make it seem like a dish I would imagine royalty eating back in ancient Persia. And I could totally get into that.

Preheat the oven to about 200c/356f. Putt the saffron threads into a small bowl and cover with the boiling water, stir gently and leave to infuse for a minute or so. Then pour the saffron water over a large bowl containing the cauliflower, onion slices, cranberries, olives, bay leaves and about 4 tablespoons of olive oil.

Mix everything well and transfer everything to a roasting dish. If you want the cauliflower to be a bit more steamed add all the water at the bottom of the bowl. For more of a roasted taste, leave the water. Sprinkle everything with salt and pepper, and roast for at least 40 minutes, stirring regularly until the cauliflower shrunk down and golden brown.

Serve on an ancient Babylonian style silver platter (obviously I’ve got one of those for this very purpose) and sprinkle with the parsley, add a squeeze of lemon juice and put this song on. *

Now you’re ready to eat like an ancient Persian emperor. 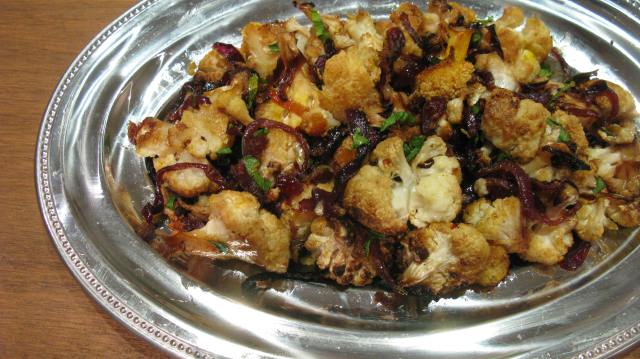 This entry was posted in Middle Eastern, Veg, Vegan. Bookmark the permalink.